Our Spanish interprofessional member Unión Profesional  (UP) have organised this year’s version of their bi-annual Congress the 5th and 6th of March in Madrid in order to boost discussions and analysis of the challenges faced by the professions, to consolidate the concept of professional and to better convey to the different sectors of society and citizens, the importance of professional bodies. The Congress coincided with the 40th anniversary of UP, founded in January 1980. 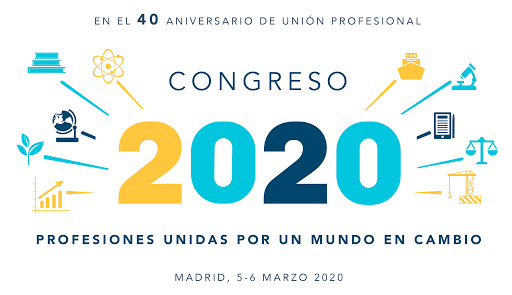 The event hosted many prestigious speakers and experts, among them Mrs. Yolanda Díaz, Spanish Minister of Labour and Economy, Mrs. Isabel Celaá, Spanish Minister of Education and Vocational Training, Mrs. Ana Pastor Julián, Former President of the Congreso de los Diputados (Spanish Parliament), Mr. Anthony Gooch Director of Public Affairs and Communications of the OCDE, Mr. Eric Thiry, President of the World Union of Professions (WUP), and our President, Mr. Gaetano Stella  who was also a member of the honorary committee and addressed participating via tele-message beacause of the current restrictions of traveling in his country of origin.

The event was an occasion to honor several professionals for their work in the fields of Human Rights, Environment, Innovation, Ethics and training. UP President, Prof. Dr. Victoria Ortega and WUP President, Mr. Eric Thiry have presented a special award to: Mr. Arno Metzler, President of the Group III of the European Economic and Social Committee (EESC) for his constant and relentless work for the liberal professions in Europe; Mrs. María Emilia Casas, for her professional career as the first woman to chair the Spanish Constitutional Court; the first Professor of Labour Law and Social Security in Spain as well as for her contribution to making women visible in this field; Mr. Howard Gardner, for his theory of multiple intelligences, which has revealed the diverse manifestations of the human intellect. His research is in fact decisive for the evolution of the educational model in which future professionals are trained. Last but not least, Mrs. Victoria Camps was also presented with a special award, for her commitment to the defense of the role of women in political life as well as for her professional career in the field of philosophy.

By actively listening to the society, as well as by studying and discussing the role of professions both in the present and in the future, the Forum gave a greater visibility to our professions as a social category and underlined the importance of deontology as the ultimate quality guarantee for our patients and clients.