Professor Dr. Victoria Ortega is a widely respected leader in all fields relevant to the liberal professionals in her country and in the Union. She is the first woman to be elected First Vice-president of CEPLIS. Since her election we were many a time inspired by her enthusiasm, efficiency and dedication to our common causes.

Unión Profesional has made a major effort, both its technical team and its members, to adapt to an extraordinary situation that has accelerated many processes.

We organised a consultation with our members during the State of Alarm, regarding their digital adaptation to the situation. 80% of them assured to have a digital platform of services, and 90% are considering a more digital functioning in the future.

During the most intense phase of the state of alarm, 100% of Unión Profesional members’ staff teleworked.

The public authorities have been particularly aware, during this pandemic, of the essential work of the professions, since thanks to the professions – both those that have been in the front line and those that have remained in the rearguard – social recognition has been achieved, which has been reflected in different areas – health, economic, social – that have a close relationship with the public authorities.

Unión Profesional has been dedicated to informing its members about all the news that were happening in time through different channels. In this sense, it has provided virtual spaces where conversation has been encouraged (videoconferences) and has designed materials such as guides and web repositories that have hosted protocols and good practices carried out by our members and that could be of help and inspiration to other professional actors, as well as to citizens.

The activity in this period has been intense, also in terms of conveying to the authorities the needs of our professionals; needs that were gathered in the Manifesto of the Professions, a document of full validity.

The professions have demonstrated a very high level of commitment, and we at Unión Profesional believe that this has led to greater trust and appreciation of their role in society. The professions have not only lived up to their ethical commitment to citizens, but have also gone far beyond it, often putting the general interest ahead of their own. Something that has undoubtedly had an impact on our society.

As far as the Lawyer profession is concerned, which is what I know first hand, there has been a very pronounced intervention mainly in legal assistance in those criminal procedures that were of necessary processing, in gender violence, in family issues, and in labour issues in the face of the situation of the ERTEs and EREs. These would be the ones that have needed a more direct intervention, professionals in the front line. Now that we seem to be getting back to normal, we are working on taking forward issues in the labor field, in the commercial field (bankruptcy) and in the contentious-administrative field, due to the number of sanctions and fines imposed during this period.

It’s already having an impact. The data is not very encouraging for some sectors, but we are confident that the restructuring period we have started, as well as the measures and subsidies that have been put in place in an extraordinary way by the government can alleviate, in part, this situation in the short term. In the medium/long term, it is time to work together to articulate strategies with all the actors involved.

The process of negotiating European aid has been a very good example of how it would be interesting for the Government to proceed with the Spanish professional subsector to guarantee loan mechanisms, for example, without neglecting the necessary reforms to ensure that no one is left behind, especially in sectors that need better public investment, even more so in the current context of the pandemic, such as social or health care. 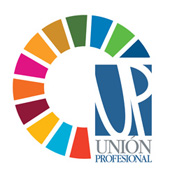 The measures carried out so far have focused on different cross-cutting areas, giving priority to strategic areas present in Unión Profesional, such as digitalisation or the environment. The professions have to be increasingly aware of the importance of developing these lines of innovation in order to adapt to the new complex realities, and Unión Profesional is the ideal space to make this happen.

The professions that have been in the front line, – and  – as well as those that remain in the rear, have been present in the process of debate on reconstruction carried out in our country, and are being taken into account in this subsequent period of transformation, each in their own field.

It would be interesting for the public sphere to understand in a generalised way the importance of professional transdisciplinarity in these processes.

Every future is about change, and our organizations must be open to transformation. At Unión Profesional we are committed to promoting an innovative spirit that allows us to analyse the present and project into the future. This effort is key at this time to be able to foresee, as far as possible, contingency plans that go beyond survival; it is about devising plans for the future from which to evolve from a common project.